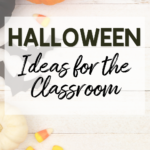 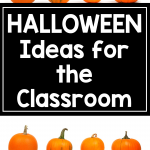 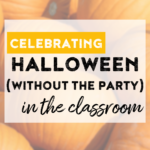 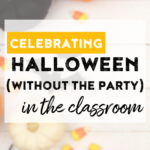 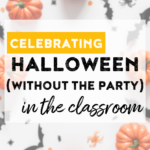 Halloween is  that magical day full of costumes, fun, and enough sugar to fuel a jet. Halloween always played a big part of my career as a teacher, because it's my second favorite holiday. I ran my schools fall festival for three years and would even hand make invites to the event! I loved planning it and the outcome was always pretty awesome. However, when it came time to plan a party in my own classroom I was stumped! I was a little “Halloweened” out by then and planning stuff for in the classroom was actually a lot harder.  After a few years, I now have a list of Halloween ideas for the classroom.

I often taught at schools with a very diverse population. We had many students who didn't celebrate Halloween, or kids who couldn't afford costumes. The schools had an annual Halloween parade and some years, every student would dress up, while other years, only half could afford a new costume. I didn't want any kiddos to miss out on having fun at a class party, so I did what every person who secretly wishes they were an event planner does, I made a theme! Creating a theme makes the day so much easier to plan for instead of trying to think of a multitude of ideas. Instead of having a hodge podge of different things….focus on a theme!

One year my kids were in love with Harry Potter, despite never reading the books. I threw a Holiday at Hogwarts party in lieu of a Halloween party because I too love HP. The kiddos still had the option to dress up, but this way, those who couldn't wouldn't feel left out. We made wands using wooden dowels and ribbons. I also brought a witch/wizard hat and the kids took turns wearing it while reading Halloween related books to the class. Obviously Harry Potter is still not totally accepted by everyone, so get approval for this prior to doing it. Here are some other alternate ideas for celebrating Halloween easily and being able to include all students!

Halloween Themed Ideas for the Classroom

Have kiddos dress as their favorite book character. Ask parent volunteers to make or buy items related to books. The ideas are ENDLESS. You can have the kids recreate the book covers from where the character is from. Set up a photo booth type area and take pictures of students dressed as their favorite characters with their books. This could also be a great day to have read aloud's from the kids! Have them read their favorite books to either the class or buddies in a younger classroom! Just make sure to specify clear rules about dress, as you probably don’t want Captain Underpants playing on the playground.

Food and candy are typically a given for Halloween parties or any party for that matter, but with food restrictions, allergies, nutrition, etc. it can be hard to think of food that not only fits the theme but also won’t make the kids have a sugar rush. One year I worked in a school that had no limits, and we had two tables full of junk food. So unless you like your kids getting sick from eating too much, don’t make that mistake! Here are some ideas for healthier alternatives for a book character day.

The Very Hungry Caterpillar: all the different fruits he eats!

Cloudy With A Chance of Meatballs: meatballs in a crockpot

Have students dress in a plain T-shirt that parents don't mind “monsterfying” .  Head to the dollar store, craft store, whatever, and stock up on “monster” items! Think fur, feathers, and googly eyes galore. The day of, make there is plenty of glue and parent helpers. They can also make monster masks using simple items such as plates and paint.

A fun activity is to recycle all those empty Kleenex boxes that you have accumulated over the past few months. Have kids create a monster out of the Kleenex box! Use paper scraps for teeth and any other recyclable items. See how creative your kids can get.

One thing about monsters is that everyone has their own vision of what a monster may look like! With Monster Mash-Up you can integrate writing into a fun activity. Give each student a paper and have them write a really detailed description of what their imaginary monster would look like. When they are finished, have them switch with a classmate. The classmate then uses the writer’s description to draw what the monster would look like! You can also switch it around and have them draw the monster first.

Have kids bring orange t-shirts that they can bring to school. Add some fabric markers, felt, glue, and you have yourself a pumpkin shirt decorating party! You can have mini pumpkins for each student, and no need to bring in 20+ volunteers or run around trying to carve all of the pumpkins….just use paint! Even your little learners will love being able to decorate their pumpkins with paint, glitter, and anything else you can think of! Bring a few pumpkins that the kids can share while pulling out the seeds. Bring a crockpot and start roasting those as a treat for later.  And for food…orange everything.

There are several other things you can to do to incorporate pumpkins to make the day educational as well!

If you are looking for some no-prep alternatives for a pumpkin party, these pumpkin-themed printables are a part of my Second Grade Fall No Prep Unit. Sometimes schools choose to not celebrate Halloween at all, although you can try and squeeze in some Halloween fun. Ask your principal first about reading Halloween themed books in lieu of having a party. These are some fun Halloween books for the classroom!

This quick little book is great for early learners. Along with Sam, students can count along as she puts more and more pumpkins in her wagon.

This is a great book to teach kids that being scared or afraid can be fixed by seeing how to fix what is scary to them. It is also a tale about how scarecrows came to be!

There’s A Nightmare in My Closet by Mercer Mayer

True story, when I was younger I “wrote” and illustrated a book titled “A Monster in My Closet”. It wasn’t until I was older that I realized I basically ripped off this book. Obviously I loved the book enough to try and write my own version. In the book, a young boy talks about his fear of a monster in his closet. It then tells how the roles reverse and the monster becomes the scared one!

For some reason, these books about swallowing insects and creatures gross me out, but kids seem to love them! This is essentially a version of The Little Old Lady Who Swallowed A Fly, but with a Halloween twist!

Chris Van Allsburg has a knack for taking things, a game, a fig, and now a broom, and creating a lyrical story. The Widow’s Broom is best for older students but still has some Halloween air to it. In the book, a widow comes across a broom left by a witch and soon discovers its powers.

Oh my goodness, if there is ever a series that would be perfect for Halloween, and even year-round, it would be the Bailey School Kids. This is a chapter book series about a school where each of the staff members if thought to actually be a monster of some sort! Anyone of them would make a great read-aloud for the month of October. You could even have kids read a different book in small groups and do a project on the fictional character in the book!

The Berenstain Bears Trick or Treat by Stan and Jan Berenstain

Berenstain Bear's books are classic and are loved by many generations. In this book, Brother and Sister Bear are going trick or treating for the first time. However, the night turns into a lesson of right and wrong.

If you are looking for even more fun and educational Halloween goodies, be sure to check out my Halloween MEGA Bundle! It contains a no prep Halloween unit with digital options, several centers, and a writing craft! 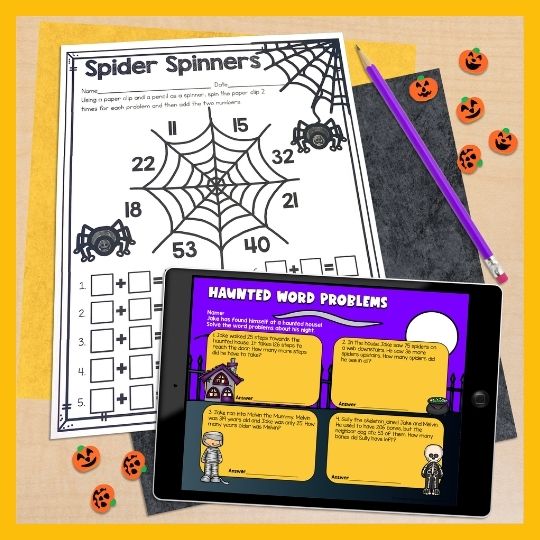 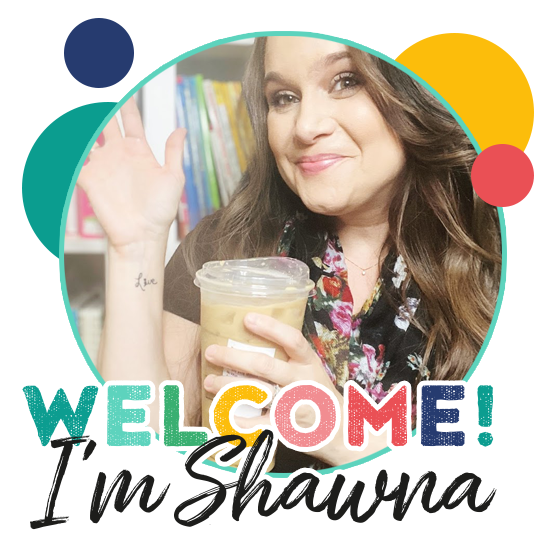 Hello everyone! My name is Shawna Peryea (pronounced pear-ee-ay…like the water) and welcome to Caffeinated and Creative. 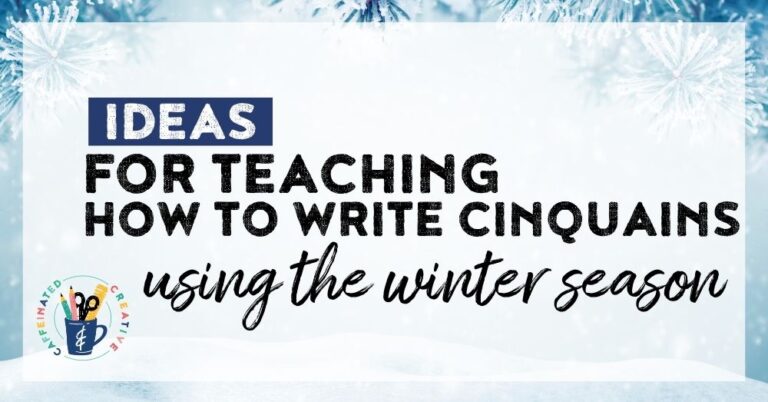 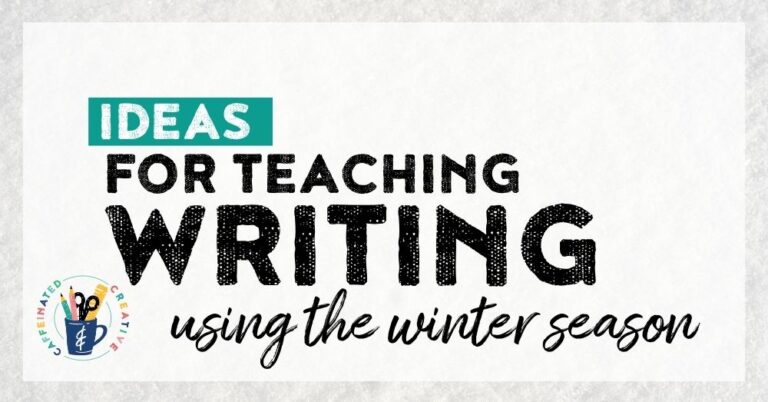 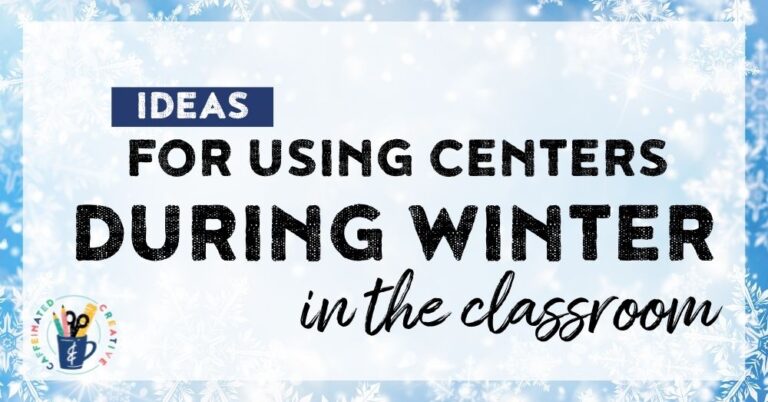